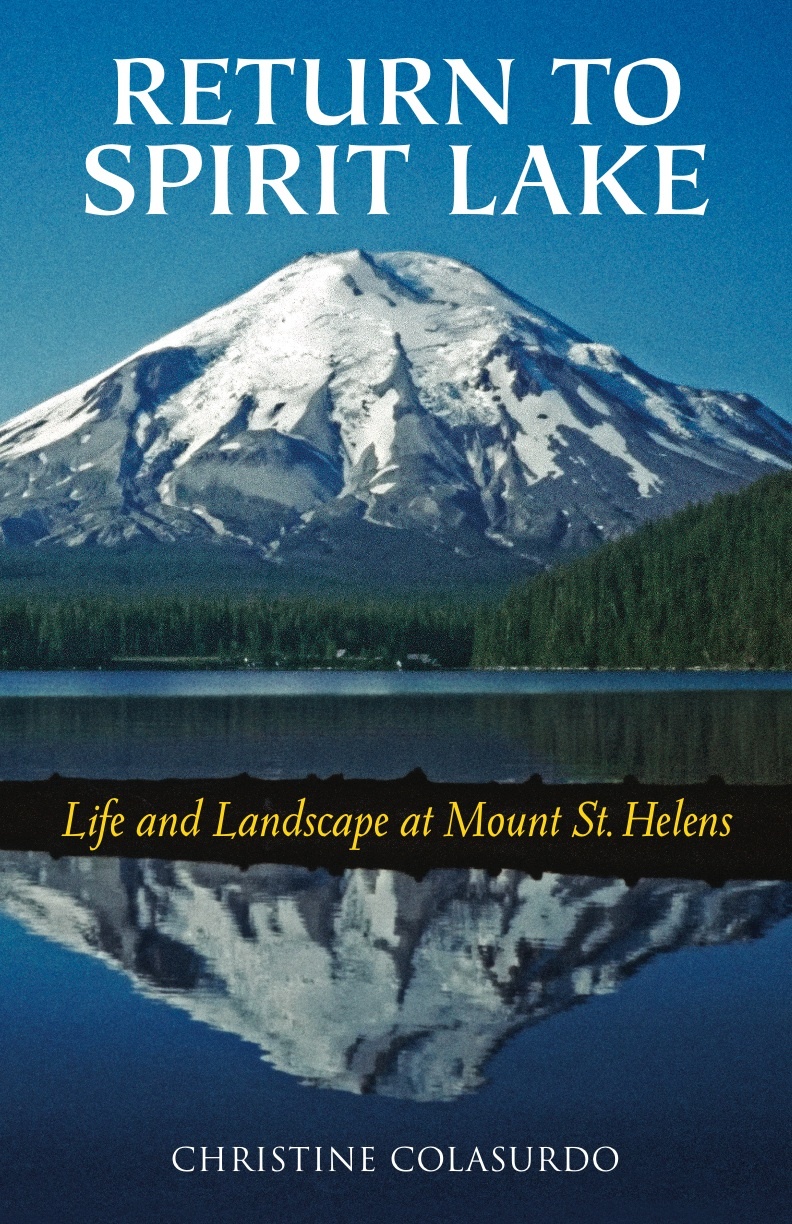 SELECTED BY THE STATE LIBRARIAN AS A 2005 WASHINGTON READS BOOK

A COLLECTED WORK IN THE UNIVERSITY OF WASHINGTON LIBRARY'S SPECIAL COLLECTIONS, “THE MOUNT ST. HELENS COLLECTION”

“It [Return to Spirit Lake] is a fine addition to the literature of the Pacific Northwest, and Colasurdo’s is a talented and welcome new voice.”

“A poignant look at the transition Mount St. Helens has undergone, Colasurdo’s book should be considered mandatory reading for anyone backpacking through the Mount Margaret backcountry.

Colasurdo lost a lot when the volcano erupted in 1980 during her senior year at Beaverton High School—the family cabin at Spirit Lake, a summer job at Harmony Falls Lodge and the familiarity of the Mount St. Helens forest that she enjoyed with her eight brothers and sisters.

It took the writer 13 years before she could bring herself to visit the blast zone. She returned to Spirit Lake to learn why, like so many others, she continued to have nightmares about the eruption. The drastically altered environment initially repelled her, until she learned to accept the beauty wrought by nature’s change.

The melding of her childhood memories with her adult trips to the new landscape makes for a wonderful tale that puts a human face on what has too often been a dry, scientific tale. Colasurdo’s work is a thing of beauty, like Mount St. Helens and Spirit Lake before the eruption.”

Return to Spirit Lake is composed like a symphony around an event that will forever be a part of the collective Northwestern memory. The four “movements”—River, Lake, Backcountry, and Volcano—comprise chapters, each of which captures the pre- and post-eruption spirit of a particular place. They are prefaced by evocative quotes from an unbelievably broad spectrum of sources.

The book chronicles the author’s grief at the devastation of a place that helped define her. Through her eyes we come to understand the power of place, and to accept that while healing continues, the landscape—and the people who once called this place home—are forever changed by the event.

Ms. Colasurdo transports us back to the pre-eruption state(s) of the Mount St. Helens landscape through stories of the characters that vacationed or lived along the shores of Spirit Lake. Through her eyes we see the catastrophic changes in the geology and vegetation surrounding the lake, and travel with the author and her twin as they explore the outer and inner landscapes of those changes.

Using pearly everlasting (Anaphalis margaritacea) as touchstone and metaphor, Colasurdo traces the natural history of her beloved and intimately known pre-eruption family hideaway and describes the reclaiming of the post-eruption landscape by a tenacious host of plants and animals. We learn also about the personal impacts of the eruption on the lives of some former human inhabitants.

Scattered throughout this very personal narrative are the results—some very surprising—of scientific studies that have been ongoing since the eruption. Ms. Colasurdo uses them as a springboard to launch into the poetry that frequently underlies but is almost never mentioned in the scientific literature. Like Edwin Way Teale, Edward Abbey, John Muir, and Henry David Thoreau, Colasurdo has taken a place on the landscape and woven it into the fabric of great American naturalistic literature.

The maps and several black and white photos are an added bonus. Even the font used to print this book is artistic. This is the book to give to friends and relatives who want to know more about the Pacific Northwest and Mount St. Helens in particular.