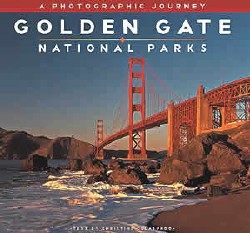 The Golden Gate National Recreation Area (GGNRA)—also called the Golden Gate National Parks—encompasses a complex collage of public lands in and around the San Francisco Bay Area in California. This enormous collection of parkland contains more than half the bird species found in North America as well as 33 endangered and threatened species. It also boasts a staggering number of more than 730 historic structures—including 12 on the National Register—as well as 61 archeological sites. From the Phleger Estate in the south to the Olema Valley in the north, the GGNRA holds a startling variety of living organisms adapted to their own micro-climate and habitat. Colasurdo’s book provides a succinct overview of these rich parklands with pertinent information presented in an easy-to-read format. Her book is handsomely illustrated by the inspired work of 22 photographers. Proceeds from the book support the Golden Gate National Parks Conservancy, which in turn supports the GGNRA through donations and volunteerism. This book makes for a handsome souvenir if you’re traveling through the Golden Gate National Parks or a keepsake if you’re a local resident enjoying the parks daily.

It’s a breezy May morning at the continent’s edge in northern California. The wind blows straight off the Pacific Ocean, over the heads of migrating dolphins, over sandstone cliffs where bank swallows nest, over acres of lupines whose swaying petals beckon hungry bees. It’s a steady wind, a fat wind, as the hang gliders say, coming onshore from a velvet horizon of water and fog. On a high bluff, a hang glider stands face into the wind, his eyes on the ocean as a red-tailed hawk hunts above. Gripping the bar of his wing, he pauses to let the hawk pass. Then, with an energetic hey!, he runs five short steps and leaps off the cliff. The wind catches his wing’s pink sail, and he rises north along the bluff like a child’s lost balloon. Casting no shadow, the dark raptor flies south, its rufous tail splayed in the fog-soft air. Like the hang glider, it sails over 500,000-year-old sandstone that is slowly crumbling into the ocean, wildflowers and all. Then, as if to illustrate the force of wind as much as its agility as a predator, the bird hangs frozen in the sky, still as a snapshot. And then it plummets out of sight.